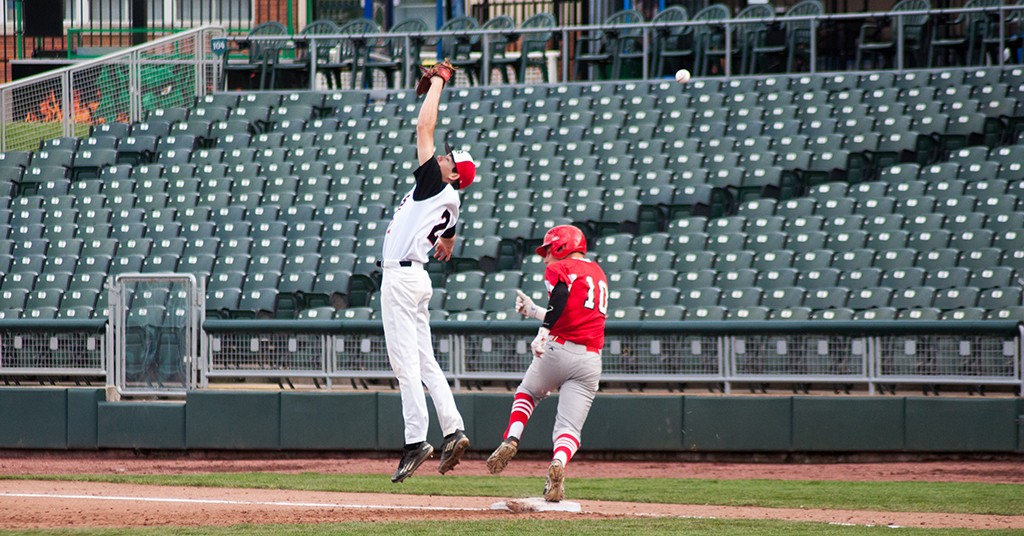 Sometimes taking advantage of what you are given turns out to be the best option to success. The Tippecanoe baseball team took that to heart last week as they battled Greenon in a CBC crossover game at Fifth Third Field in downtown Dayton.
The Red Devils took advantage of a couple of big errors to build an early lead, and cruised to a 9-2 victory over the Knights.

Tippecanoe came out strong in the first inning and set the tone. Aaron Hughes led off the game with a double and it appeared that he might be left in scoring position, before Justyn Eichbaum walked and Bradley Calhoun ripped a big two-run double to drive in both runs. Calhoun, also the starting pitcher for the Red Devils, put Tippecanoe in front early.

After Calhoun retired the Knights quickly in their half of the first, the Red Devils came back and added to their lead in the second.
Josh Reibe singled to lead off the inning but was caught stealing. After a second out was made, Cole Barhorst walked, and Hughes dropped one in that allowed Barhorst to score pushing the Tipp lead to 3-0.
Greenon fought back and quickly made it a one-run contest. Dominic Kuzujankis walked to lead off the second for the Knights and Adam Campbell doubled to put the pressure on the Red Devils. Riley Williams drove in a run on a ground out, and when Cooper Chafin knocked in a run with a single, Greenon closed the deficit to 3-2 heading to the third.

That’s when the floodgates opened for the Red Devils. In the third inning, Tippecanoe took advantage of two big Greenon errors, as Eichbaum walked with one out and Calhoun singled, before Trevor Staggs reached on the first error to load the bases. Following a strikeout against Reibe, Jakob Ambos reached on an error which allowed two runs to score, making it a 5-2 game.

Cole Barhorst then drove in Ambos and Staggs with a single to push the lead to 7-2 as Barhorst was thrown out trying to advance to second base.
Another Tipp run came across in the fourth as Hughes led off with a single, and one out later Kraska reached on an infield single to score Hughes to stretch the Tipp lead to six runs.
Greenon had a threat in the sixth as Chris Winter and Kuzujankis both reached on singles with one out in the inning, but they were left stranded by Calhoun.

Tipp capped the scoring in the seventh when Clay Barney reached on a leadoff single, Nick Hoff walked and Clay Barhorst drove in the run with a fielders choice. Tipp then loaded the bases before a strikeout ended the threat.