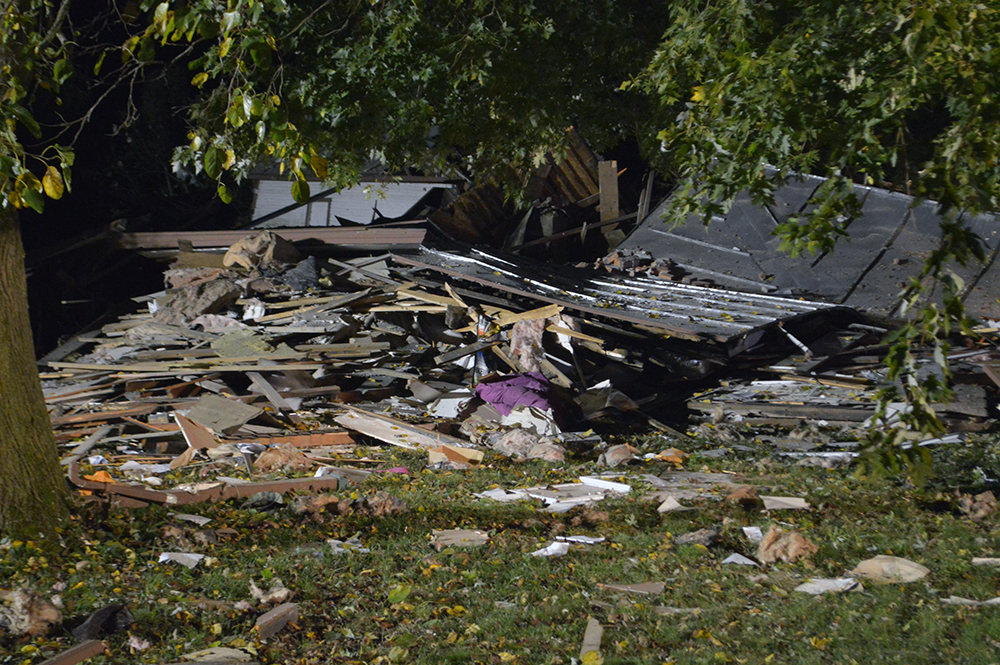 A home in the 7800 block of Lower Valley Pike exploded Thursday evening. The house was unoccupied at the time.

“We’re not 100% sure, but we’re leaning toward a gas leak,” said Drew Goings, investigator for the Bethel Twp. Fire Department. “I’ll know more when the State Fire Marshal gets here and we sort through the rubble.”

There were no flames and the Fire Department ran no lines.

Goings said that they searched the rubble and nearby fields for victims, then were informed that the resident was out of town.

The blast could be heard for miles. Reports of the blast came from New Carlisle, Enon and even Lawrenceville.

“We were unloading trucks about a half mile away and felt a huge compression through our bodies,” said John Augenstein, and employee of Sanders Concrete. “We came down and smelled gas.”

Augenstein said that they heard gas hissing from the propane tank and shut off the valve. He said they then set up lighting to cover the area. “The refrigerator was bent in a U-shape,” said Augenstein. “It took quite a blast to reduce a two-story home to a pile five feet high.”

Herbert Hoover, the owner of the home, also speculated that a gas leak caused the explosion, and confirmed that the resident, named Carlos, was in Cincinnati but was heading back home.

A nearby resident reported that the blast knocked pictures off of the walls of his home.

“There was no gas odor when we arrived,” said Lt. Porder of the Bethel Township Fire Department. “I’ve never seen anything like this.”

“We are truly thankful that no occupants were home,” said Bethel Twp. Fire Chief Jacob King in a text message. “The scene is breathtaking by the amount of damage that occurred. We have a two-story farm house that was completely leveled. Mass destruction.” King was not on duty at the time.

Debris from the blast was scattered throughout the property, in neighboring fields and across Lower Valley Pike.

The explosion remains under investigation by the Bethel Twp. Fire Department and the State Fire Marshal.