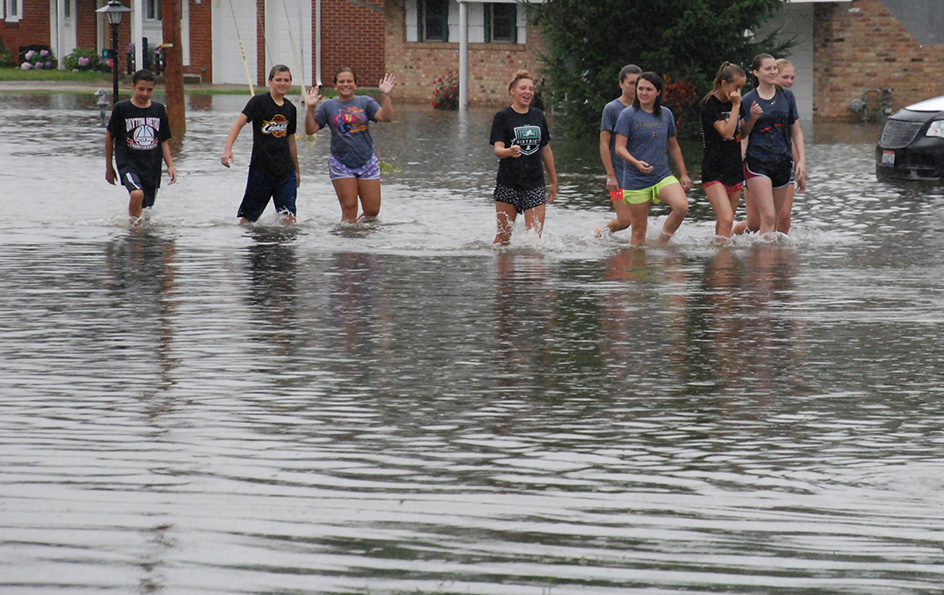 Residents of Enon and Mad River Township were hit hard with flooding when over two inches of rain fell before Noon on Thursday, July 6. Crews from the Enon Police Department, Enon Public Works and Mad River Township found themselves putting up high water signs, barricades and using vehicles to block flooded streets throughout the community.

Especially hard hit were the residents of Grand Valley and Green Vista in the main part of Enon. Water was waist high on some of the teens who decided to venture down Green Vista just south of Indian Valley School. One yard at the edge of the IV property had children’s plastic toys floating up to the fence where they would normally be in the middle of the yard.

Crews from the Village of Enon were busy pulling grass out of the storm sewers near the apartments just east of Stine Road. Although the Village has a policy on not blowing grass clippings into the streets, the township does not and areas in the Green Meadows subdivision had storm drains that were slowed by debris.

In Houck Meadows, the residents of Cardinal Drive have complained repeatedly about flooding from the average rain. On Thursday the ditches that carry storm water runoff were overwhelmed as the water flowed to Crane Drive and on to Mud Run to the south of the subdivision. A similar situation also existed at the corner of Crane and Blue Jay where flood waters flowed into the streets. One resident with a sense of humor appropriately named the area “Enon Protected Wetland”.

In the Green Meadows subdivision, both Arnold and Green Meadows Drives had high water to the point where residents could not access their driveways and fire hydrants were seen with water up to the middle of them along the roadway.

On Southern Vista in the township, waters flowed through the backyards of homes out into the street causing some residents to be unable to leave their driveways. This is the area where the Board of Township Trustees paid for a civil engineering review a few years ago to address the flooding problems. The study also included the flooded areas of the Green Meadows subdivision where flooding occurred during this storm. To date no improvements have been implemented in the area and residents will most likely continue to see this type of flooding during heavy rain events.

Along Grand Valley in the Village of Enon, local resident Maxine McKee was found with water in her garage caused by the storm. Grand Valley in the area of homes originally owned by Don Blair was flooded again making it impossible for residents to easily reach their homes.

Moving out into the township, the spillway along Rebert Pike was flowing quickly with one of the biggest displays in some time of fast moving creek water. Along Fowler Road to the north Mud Run was quite high and moving quickly to flood farm fields to the west.

The home of Dr. King on the south end of Fowler appeared to have a new pond forming in the yard to the south as water rushed across the road moving west. A garden to the south just before Broadway Road was under water leaving little doubt that backyard gardens as well as farm crops would be taking another heavy hit this week. The flood waters slowly receded however roads remained blocked well into the afternoon.