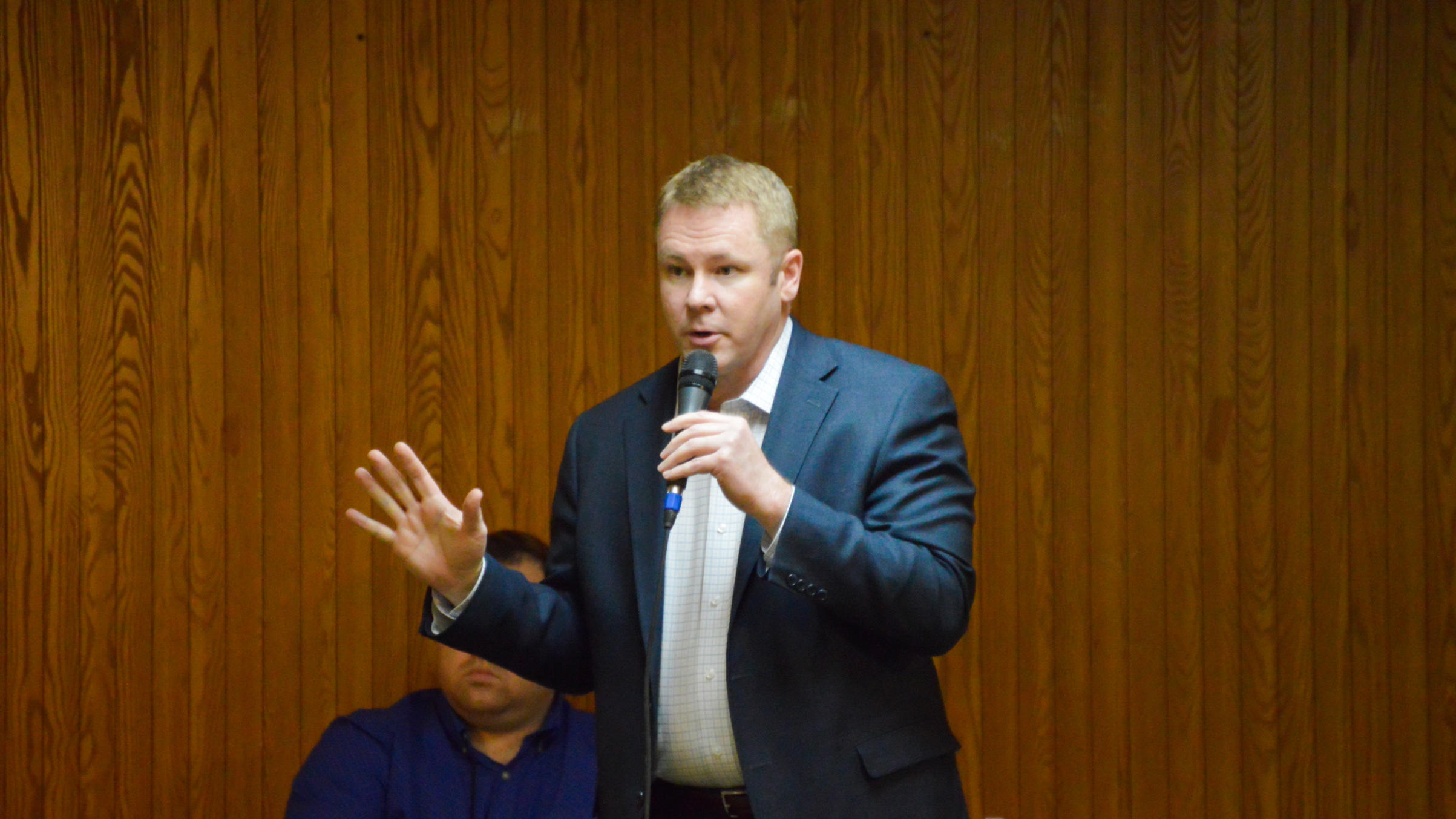 The Enon VFW welcomed the Springfield Indivisible organization to host a town hall meeting on Tuesday, April 18, 2017 beginning at 6:00 pm. Guest speaker at the event was 8th District Congressman Warren Davidson. Moderator Brad Minard welcomed Davidson to the stage and reminded the audience estimated at just over 100 that the purpose of the meeting was to have a “respectful and meaningful” dialog. At the door, guests received a red and a green card so that they could show their opposition or support of statements made by Davidson during the hour long question and answer session.

State Representative Kyle Koehler along with Sheriff Deb Burchett also attended the event. Both Davidson and Minard thanked the officers from the Clark County Sheriff’s Department that volunteered to come out to the event for their services.

Davidson told the audience that “people have questions” and that the best way to know how someone is feeling is to answer those questions. He has held over 100 meetings, public forums, visits to businesses and other events in his district this year. He noted that what the people want done in Washington comes from the dialog with their House and Senate elected officials.

Davidson shared his belief that “we are still on the path to bankruptcy” in this country and that it will take “big thinking” to solve the problems faced by the nation. As the question and answer portion of the meeting began, guests quickly lined up at two microphones provided.

The overall recurring theme centered on health care and how Davidson would see the future options for replacing or improving the current Affordable Care Act. Cherryl Huffenberger from Springfield asked Davidson about President Trump’s plan to defund Planned Parenthood. She noted that women living in rural areas or those who are “low income women” would not have “services available to them” if the law makers do not separate the abortion issue from the need for health services provided by the organization. Davidson responded that he did not feel that any “organization was entitled to” receive a significant portion of funding from the federal government. He suggested that “a lot of folks feel there are better options” causing the audience to raise their red flags in opposition to this statement. He went on to suggest that in one Ohio community there are 20 community health centers to provide preventative care for women such as mammograms vs. a single Planned Parenthood clinic. Huffenberger later told the Enon Eagle that she “doesn’t see why abortion is driving the defunding” when the organization should not be judged on a moral issue as abortion is legal in the United States. She noted that lawmakers are allowing their personal feeling to drive their decisions rather than serving all of their constituents.

Davidson was also asked about his vision for a health care system in the United States. He explained that he along with other members of Congress purchase their health care plan from the ACA site. He currently has a high deductible Health Savings Account (HSA) that has a $6,000 out of pocket clause. He stated that his vision is what lawmakers are currently considering voting on. He would like to see a “federalism” solution that would allow states to each be different in making choices to fit their resident’s needs for insurance plans. He noted that there is not broad consensus at this time on some matters. He prefers a “free market” health care system.

Jan Kushmaul asked Davidson to explain an HSA; however she came away not feeling like she received an answer that explained how the savings plan actually works and how it would benefit lower income families.

While health care ruled, the environment was a close second at the meeting. When asked about the elimination of the Environmental Protection Agency (EPA), Davidson responded “I never met anyone who doesn’t love clean air and clean water”. He noted that he does not believe that we should not have regulations; however he does see the need to have a more streamlined approach as to how the regulations are written. He cited some current regulations are hundreds of pages long when they could be rewritten to a shortened more easily implemented version. He went on to explain that both state and federal representatives have supported the need to clean up the Tremont City Landfill that threatens drinking water in Clark County.

In regards to the second half of the question involving the cleanup of the Great Lakes, Davidson explained that this was not a job for the individual states, but rather requires federal funding to be completed.

When asked about his membership in the “Freedom Caucus”, Davidson explained that he elected to join this group based on attendance at meetings. He noted that in Washington, a Caucus is a group of people who get behind a cause. He suggested that the Freedom Caucus is based on the Republican platform. He noted that in a Caucus meeting, the members enter into “real debate” which is not the case on the floor of the House. He stated that he feels that this group is “effective” and that often once in Washington, lawmakers do not always follow what they campaigned on. The Caucus is a place to hold debates and frank discussions to sort out topics.

Davidson noted that he does not always vote along party lines. Regarding the health care bill he stated “you have to lower costs” suggesting that any replacement or changes must be “affordable”. In an answer to Cynthia Dunlap who asked about a government run health care option, he was clear that he would not support a federal health care plan run by the government.

In regards to a question on allowing Syrian refugees to enter the United States, Davison stated that he supported “risk assessment”. He noted during his comments that he supports putting an end to the reason so many feel the need to flee their country. He also suggested that staying close to their home country would be a preferred option. He gave an example of an interpreter from Iraq who served the United States being a low risk refugee while a group of men from Syria who wanted to enter the U. S. would need a more extensive risk assessment to determine their possible entrance to the U. S. He went on to note that he did not feel that America should be supporting every situation. “We have given more help than anyone” referring to the support given to other countries in the world by America.

In closing Davidson thanked those who gave up their evening to attend the event and for asking questions. Overall the event was very quiet compared to the recent meeting in Troy. The use of the red and green cards gave Davidson a clear picture of how his constituents felt about his answers and also about some of the questions being asked. He invited anyone who did not have their question answered at the meeting to contact his staff. After the meeting, members of Indivisible provided the written questions to Davidson’s staff member for reply by e-mail provided on the cards.